One of Australia’s finest Spanish Guitarists, Andrew Veivers draws on a wide range of musical influences to evoke the sensual and mesmerising sounds of the Spanish guitar in all of its guises.

From the beginning, Andrew combined the traditional study of flamenco with the formal training of the classical guitar. After graduating with a Bachelor of Music in 1993 from the University of Queensland (St. Lucia) Andrew spent 3 years studying, teaching and performing in London, Madrid and Amsterdam.

At venues ranging from Blenheim Palace (UK) to The Dillington Classical Guitar Festival (UK) to chamber music series' in The Netherlands to concerts in Japan and performances at many of Australia's leading concert venues and festivals, Andrew has appeared as a soloist as well as with his groups Flamenco Fire and The Saruzu Quartet to great critical acclaim.

"..The energy in this show is breathtaking. Both the musicians and the dancers give so much to their performances....For two hours last Thursday evening I felt like I’d left Brisbane and had, by some inexplicable musical effect, been transported to Seville. Ole!.. (Glenn T, FMV TV Inside Entertainment : Theatre Review, Feb. 2012)

"..Saruzu's evocative filmic style conjures a world beyond the music; both of intimacy and grandeur.." (Michael Peterson – Woodford Folk Festival)

Drawing on their personal cultures and unique artforms "Kooralbyn" features artists from across the globe including First Nation, Tibetan, Celtic and Northern European musicians. Artists shared compositions/songs from each of their homelands (Tibet, Sweden, Holland, Britain, Australia) and their musical traditions (flamenco, jazz, First Nation, Tibetan, African, classical) as a starting point for this unique collaboration. The resulting work is an exploration of the interconnectedness of their individual cultural backgrounds expressed through the textual possibilities and traditions of their instruments. Kooralbyn embraces a celebration and deconstruction of genre related technical and structural forms..... with the resulting new work bearing little sonic resemblance to the original traditional tune but maintaining it's integrity as a shared expression of collective cultural authenticity. 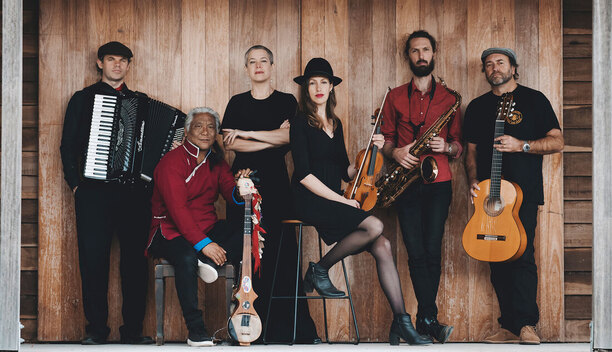 ​Y o u k a l i
Vocalist Kacey Patrick and guitarist Andrew Veivers combine to present an enigmatic selection of jazz, folk and world music. Best known for her work with duo stringmansassy, Kacey’s three-octave vocal range is a rare instrument combining sublime vocal intuition and beauty, with instinctive risk taking and vocal soundscapes. One of Australia’s finest Spanish Guitarists, Andrew Veivers draws on a wide range of musical influences to evoke the sensual and mesmerising sounds of the Spanish guitar in all of its guises.

​The Saruzu Quartet
Drawing from the rich harmonies of Argentine Tango, the wild improvisations of Gypsy Jazz and the fire and grace of Flamenco, The Saruzu Quartet (formerly
SARS - no prizes for guessing why we changed our name in 2006!) is a celebration of the diverse musical passions of its members. With respect, abandon, precision, and recklessness Saruzu gives established musical boundaries a polite shove and invites you to dance.....or maybe just a glass of wine!!

Flamenco Fire
Dazzling Footwork. Compelling Rhythms. Stirring Songs.
Flamenco Fire evokes the exotic roots of the sensual and mesmerising art form that is Flamenco.
Since 1999, Flamenco Fire has been thrilling audiences with a heady mix of traditional and contemporary flamenco music, dance and song. A collaboration of Australia’s finest flamenco artists, Flamenco Fire features singers, dancers and musicians from Brisbane, Sydney, Melbourne and Adelaide in a beautifully crafted show that reveals the flamenco artform in all of its guises. From contemporary festive dances to heart wrenching traditional songs, to fiery guitar ensemble pieces, Flamenco Fire will transport you to España......¡Olé!
Flamenco Fire is produced by Queensland events company - Red Chair - in collaboration with Andrew Veivers.

For detailed information on Kooralbyn, Youkali, The Saruzu Quartet and Flamenco Fire please click on the Red Chair icon