For the past decade Andrew has been developing a very personal and clearly identifiable compositional style. His passion for both the classical and flamenco worlds of music, song, and dance have resulted in compositions that stylistically draw inspiration from greats as diverse as Manolo Sanlucar, Steve Reich, and Manuel de Falla while retaining a clearly individual lilt. Deeply rhythmical, harmonically adventurous, and unashamedly lyrical , the architecture of Andrew's compositions reflect his ability to seamlessly join the rigorous research of a topic with the emotive goal and direction of a lyric or melody.

"..Each moment in this performance was a spectacle, each song a triumph and all of the dances were superb and electrifying. It made me sad to know that this was such a short lived run in Brisbane, but what a run, what a show. It is not in my habit to completely praise every aspect and element of something that I view and it surprises me with the degree to which this show was outside my comfort zone to be giving it a well deserved and highly enthusiastic five stars and faultless review.." (Brent Downes, Theatre People, Feb. 2012) 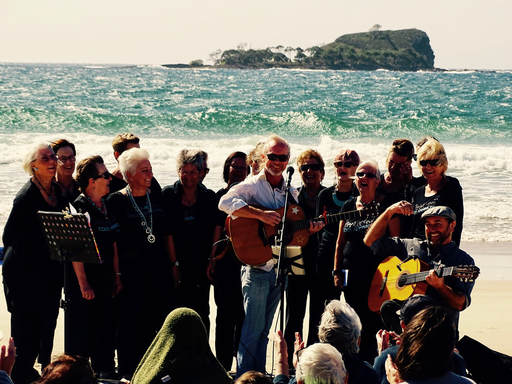 Forest to Sea
by Andrew Veivers

My four movement composition ‘Forest to Sea’ is intended as a reflection on the continuity of community on the Sunshine Coast. The musical themes and lyrics explore and reference stories, traditions, dreams and histories of indigenous, farming, family and tourist communities and their connection with, and response to, the diverse natural environment of the region. The composition is arranged for and draws from the textures of solo and choral voices, string and wind ensembles and solo and ensemble guitars and is arranged in 4 movements; Gathering, Canopy of Blue, Footfalls Echo in the Memory, and A Rivers Restless Heart.  Although incorporating observations of human experiences of the region; gathering for feasts, walking through the landscape, falling in love - be it with another person or the landscape itself, the central character of the composition is the river. This character serves to both reinforce the actual physical connection between the mountains, farms and sea as well as being a metaphor for community; constantly flowing, changing, dreaming and building. The river travels from the mountains; an area of ancient story(dreams), traditions of working the land to produce food, an environment both rewarding and heartbreaking. A destination and a starting place. It moves restlessly, passing through gently rippling fields containing local crops (with a sweet kiss - sugar cane and a healing touch - ginger), sustaining a rich harvest of fish (in the twisted nets in the shallows) before arriving at the sea; whose vastness represents a future of endless possibility, the ultimate rewards of which are renewed via rain on the mountains. An endless cycle. The continuity of community.
This composition was made possible through generous support from The Regional Arts Development Fund (RADF). RADF is a partnership between the Queensland Government and Sunshine Coast Council to support local arts and culture in regional Queensland.
‘Forest to Sea’ was premiered by Alan Kelly, Cool Harmonies Choir and Andrew Veivers at the event Storyplace Mudjimba Island 2017 (as part of the 2017 Horizon Festival) - photography by Amanda Williams.

The People's Orchestra @ The Cairns Festival 2014

Commissioned by The Cairns Festival, RADF, 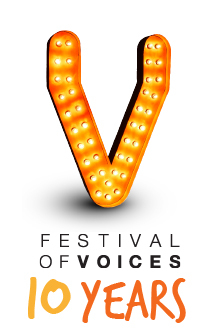 Commissioned by Neil Cameron and the Festival Of Voices  - July 8th to 11th 2014.

To compose for and direct a community based brass and percussion ensemble to perform at Tasmania's Festival Of Voices signature event, The Bonfire & Big Sing.

The event is the climax of the festival and is designed to "..warm your heart and inspire your imagination, the Bonfire & Big Sing return to Salamanca Place as part of our special ten year celebration, directed by Festival founder Neil Cameron, master of surprise and spectacle..."

Led by world renowned artists and hundreds of choristers, we invite you to join us and share the stage with our Festival guests, The Exchange and Spooky Men’s Chorale, as we unite in one voice for the Big Sing and create a choir of thousands for a mid-winter night’s magical evening unlike anything you’ve ever experienced. 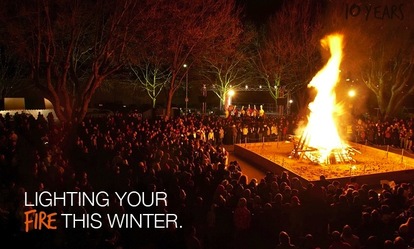 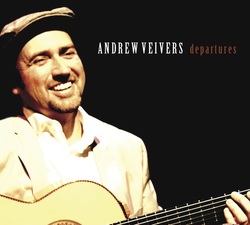 Commissioned by The Sunshine Coast Council through The Regional Arts Development Fund - June to August 2013.

This commission will result in the composition and recording of a 40min work of original compositions for solo Spanish guitar.

The pieces will be reflections on people, places, and projects that have been pivotal in my development as a musician and composer over the past 20 years. Some of these pieces already exist as short thematic sketches, some as short composed themes that have been used within recent theatrical productions, and some in the earliest stages of creation i.e. the topic that will inform the structural narrative of the piece has been identified and a broad plan in regards to the style and structure has been developed.

Although initially drawing on the technical and rhythmic language of the flamenco art form, that has been the basis of my own 20 year performance career, recent compositional engagements with The Sydney Theatre Company, Woodford Folk Festival and Floating Land Festival have heavily influenced the continued development of a very personal and clearly identifiable style - one that draws on the strengths of the compelling rhythmic interpretation of the flamenco idiom combined with a thematically driven lyricism that supports corresponding structural narratives. This project reflects my desire to capture these elements within the relative constraints of the subtle textures available to compositions for solo Spanish guitar. 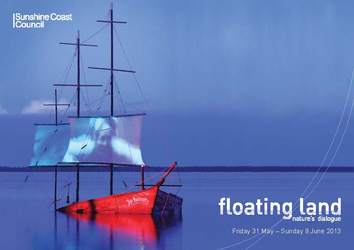 Stillness And The Moving
by Andrew Veivers

Commissioned by the Sunshine Coast Council for the Floating Land Festival - 1st to 8th  June 2013.

Inspired by the festival theme of Nature's Dialogue, I wanted to explore the structural nuances of a simple conversation. Of course, even simple conversations are never all that simple or straight forward. Not really. There are always subtle layers of meaning; humour, sadness, gentle advice, hidden disappointment, teasing innuendo, a little whisper for help. So, even upon my first investigation of the theme, and how it might manifest itself in a piece of music, the apparent simplicity of one conversation revealed the reality of many conversations - between the flora and the fauna, between day and night, between mother nature and us pesky humans, between the physical senses and the imagination, and maybe even the ultimate little chat - between all of the above and time.

The compositional style and instrumentation that I chose to use for this piece are a symbolic representation of many of these themes. The short percussive sounds of the marimbas evoke the scampering, fluttering, scratching, digging, and general busyness of wildlife - the insects, crabs, birds, bugs, and even humans going about their life, while the long, sustained notes and phrases of the strings represent the rising and setting of the sun and moon and the slow, powerful and inevitable growth of plant life; constantly reaching. These abstract notions are brought more clearly into focus and unified by the human voice, with lyrics drawn from the poem's 'Five Senses' by Judith Wright and 'Time' by Nate Hawk.

To further my investigation of the notion of a dialogue, I have both combined elements of the compositional ideas of minimalism within a simple binary form, as well as included a conversation within the orchestration; both within the voices of each ensemble as well as between the ensembles themselves.

Finally, this piece is intended as an underscore or accompaniment to the artworks and the natural setting that they are inspired by, drawn from, and will be located in, during this year’s festival. 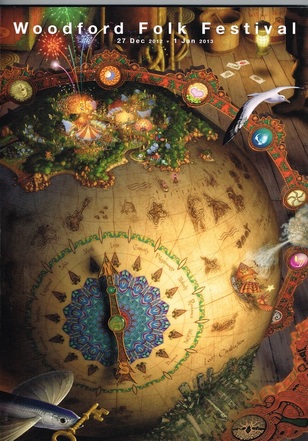 A large scale (100 + instrumentalists) community based orchestra consisting of festival patrons who, after rehearsing daily during the one week festival, contribute to the live soundtrack of The Fire Event - A huge outdoor theatrical performance involving a team of hundreds of artists, performers, singers, dancers, technicians, volunteers and an audience in excess of 25,000 people.

Repertoire for The People's Orchestra consisted of original composition and direction by Andrew Veivers ,with 'spontaneous' arrangements of both instrumental pieces and choral accompaniments developed throughout the week by collaborators/section leaders Mal Webb, Andrew Clermont, and Matt de Boer.

A project that pushes established musical boundaries, excites sensory receptors, and suggests a version of an orchestra that you may never have considered - think session bar meets Wagner. 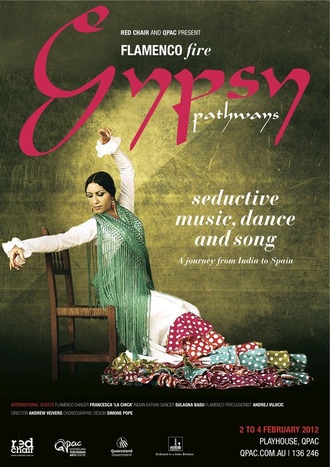 
Celebrating the epic nature of this great migration, Gypsy Pathways looks to the elements of the rich and diverse cultures that the Romani people both brought with them, with their kathak traditions, and encountered and integrated with their own during their travels through Persia (now Iran), and North Africa.  Many of these influences were ultimately to come together when they arrived in Spain, arguably adding the most crucial ingredients to what was to become flamenco. 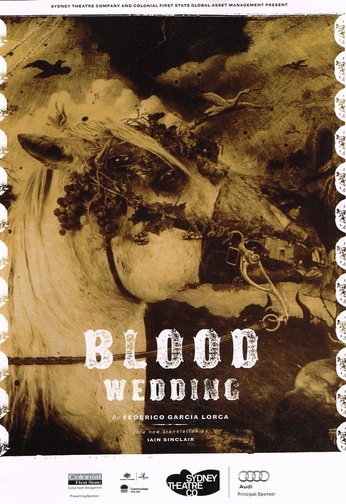 Commissioned by The Sydney Theatre Company.
Directed by Iain Sinclair.

A word from the Artistic Directors of The Sydney Theatre Company, 2011

Federico Garcia Lorca's Blood Wedding is a classic of the Western twentieth century canon; a beautiful, brutal masterpiece for the stage. Few playwrights combine the prosaic nature of village life and flights of mythological fancy with quite the same deftness of touch and clarity of vision.
Translated from the original Spanish text and directed by Iain Sinclair. A new text that vividly evokes our time and place while remaining true to the spirit of the original.
In the hands of a strong cast, lead by the wonderful Leah Purcell, this production of Lorca's rural tale of love, death, spark, and flare.
Set to a soundtrack by musician and composer Andrew Veivers, and performed on a set designed by Rufus Didwiszus...

Working from both the original Spanish text and Iain Sinclair's translation, a musical score was composed by Andrew Veivers and performed live throughout a season of fifty performances.  The score consisted of fifteen individual, yet thematically linked, pieces for voice, Spanish guitar and percussion, and included solo and ensemble songs as well as instrumental motives that returned thematically supporting the dramatic narrative.

This clip was filmed during rehearsal: 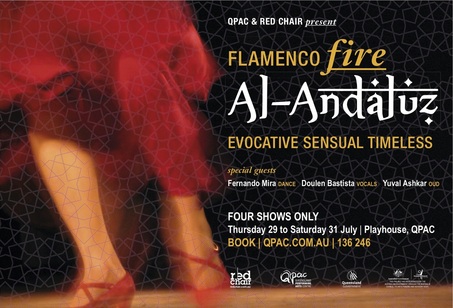 Commissioned by the Australia Council for the Arts, Arts Queensland, and Red Chair - July 2010.

Al-Andaluz, the name of the area of the Iberian Peninsular that was to become Spain.

Drawing from the rich influences of over five centuries of Music, Dance and Culture, Al-Andaluz celebrates the evocative mix of the sacred and secular music of the Moors, the Sephardic Jews, the Gypsies and the Northern Europeans and role they provided for the foundation of the great art of flamenco.
An epic story in it's entirety, Al-Andaluz' narrative is an interpretation through music, dance and song of key pivotal points throughout the 500 year evolution. As a reflection of flamenco itself, Al-Andaluz doesn't follow a neat historical, chronologically linear format. It is many stories told together, almost always glancing backwards in time, with only gentle sense of movement through the centuries.